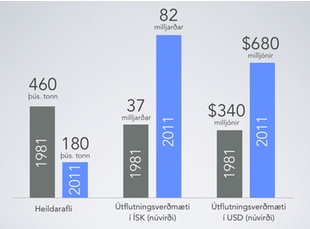 A new Ocean Cluster Analysis describes the vast increase in export value of Icelandic seafood products despite decreases in fishing quotas for the past decades. While quotas have declined in Iceland, some nations have seen large increases recently, particularly in cod quotas in the Barents Sea. This has triggered concerns about the effects of such a global increase in production on global market prices. If history is any indication, such worries are probably unnecessary for Icelandic fish producers. Icelandic cod landings dropped from 460,000 tons to 180,000 tons between 1981 and 2011 while the total export value of cod products went from $340 million to $680 million (present value). This vast increase in export value per landed ton can mostly be contributed to the significant modernisation of the industry, in the form of increased raw material utilization, product diversification and innovation. This value increase per landed cod has continued in the past few years but for it to sustain in the future, investments in innovation in the Icelandic ocean cluster are clearly going to have to rise.