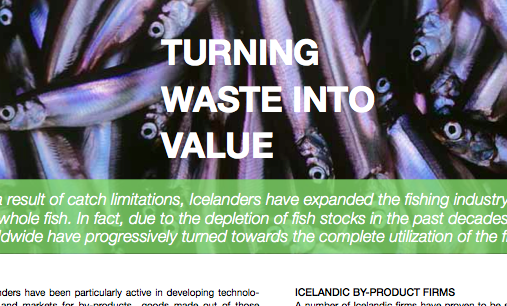 Icelanders have been particularly active in developing technologies and markets for by-products – goods made out of those parts of the fish typically not considered for production. Up until a few years ago, the number of products made from white fish was relatively meager. In the past years however, the Icelandic industry has undergone significant modernization in the form of vastly improved product diversification. According to Statistics Iceland, domestic production of by-products went from 1,667 tons in 1992 to 47,782 tons in 2010 which translates to a 2766% increase in 18 years. Among Icelandic goods made out of by-products are dried fish heads, dried bones, skin lotions, leather, skin regeneration products, caviar, omega-3 fish oils, protein isolate, gelatin, mince and many other products.

Iceland Ocean Cluster is currently conducting research on the utilization of cod in the North Atlantic Ocean. The preliminary results estimate the utilization rate in cod production in the area to be around 50%. If this holds true, the three most active cod fishing nations wasted 375,000 tons of cod in 2010 through discards at sea and unnecessary waste in processing. According to our findings, Icelanders have achieved up to 95% utilization of the cod by effectively exploiting cutting-edge technologies. By spreading this knowledge and raising awareness of complete utilization, substantial benefits can be gained in fish production around the world.

A number of Icelandic firms have proven to be successful in producing and selling products made out of fish by-products. Consider the stories of three interesting by-product producers:

Zymetech is a knowledge based biotechnology company, most recognized for their so-called Penzyme Technology. The company is grounded on decades of scientific research and has been developing and selling pharmaceutical products and medical devices made from by-products of the Atlantic cod. Their principal product, PENZIM, a water-based skin gel has been sold in international markets for several years.

Haustak, founded in 1999, specializes in drying fish products and sells dried heads, bones, stock-fish and chops. The market for dried fish keeps growing, but most of Haustak’s production is shipped off to Nigeria, the worlds largest and most stable market for dried fish bones and heads. The firm currently employs around 50 people and continues to flourish.

Lysi, considered the world leader in the field of marine lipids, was established in 1938. The company’s operations are based mainly on the production of cod liver oil but it’s consumer product line includes Omega-3 fish oil and shark oil also. The firms international operations have been growing steadily for the past years and Lysi recently doubled its output for fish oils by extending its processing plant.

Zymetech, Haustak and Lysi represent just a small fraction of the numerous by-product producers in Iceland. All of these firms are utilizing parts and raw materials that would otherwise have been wasted and discarded, sometimes at a substantial cost.  The Icelandic fisheries sector has flourished since the 2008 crisis in spite of fairly loud and destructive disputes over its catch-management system and taxation policy. Despite some uncertainties over future outcomes, the fact of the matter is that Icelanders are experts when it comes to fish production and utilization. In our view, it is crucial that discussions are steered away from bickering over regulations into exploring new opportunities, increasing value added and further developing this exciting industry.