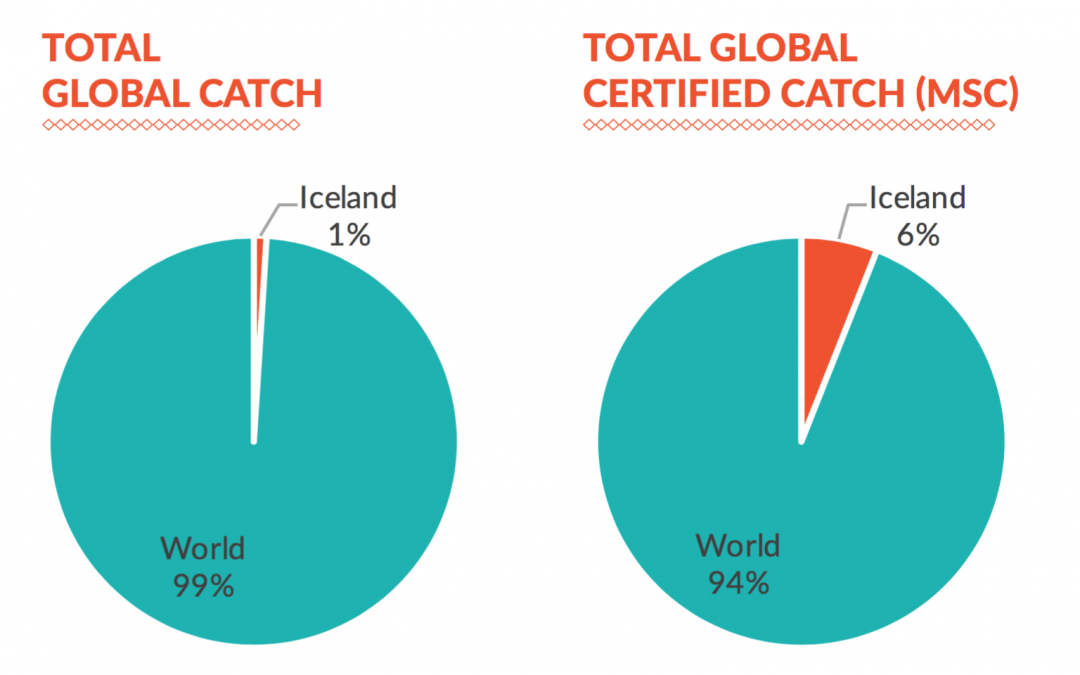 While Iceland contributes around 1% of fish to the global stock, in 2014 it contributed 6% of Marine Stewardship Council (MSC) certified fish (ISF, 2016). Iceland has thus been a prime contributor to the United Nations 2020 Sustainable Development Goal to reduce destructive fishing practices and to produce maximum sustainable yield. Domestically, 50% of Iceland’s 2014 catch (1.1 million tons) was sustainably certified (ISF, 2016).

While there are nearly 30 eco-labels for fish products, MSC is the most dominant and rapidly expanding label (Bush, 2013). The MSC certification emphasizes stock status, eco effects of fishing, and management systems. In 1996, excessive fishing drove species like Canada’s Atlantic Cod to commercial extinction. In response, the MSC launched a market driven approach to change behavior in buyers. Because of MSC insistence on objective and transparent scientific assessment, it was the first organization in the world to fulfill the Food and Agriculture Organization of the United Nations’ eco-label guidelines for seafood products.

In 2014, Iceland contributed 550,000 tons (or 6%) to the global sustainably certified catch (ISF, 2016). The Iceland Sustainable Fisheries (ISF), which works to secure MSC certification for Iceland, hypothesizes that with the additional certification other species like Capelin, Mackerel, and Blue Whiting Iceland could contribute an even larger percentage to the sustainably certified catch.

The Atlantic Mackerel first appeared in Iceland in the 21st century. It can live up to 20 years in the wild.

The Capelin is more slender than the Smelt. From above its color is a transparent olive or bottle green. A delicious little fish on the table, wrote 18th century naturalists.

The volume of global wild seafood catch that is sustainably certified has almost doubled from 2010 to 2015 (MSC, 2016). A 2012 study found that the biomass of certified stocks “increased by 46% over the past 10 years, whereas uncertified fisheries increased by just 9%” (Gutierrez, 2012). Consequently, Iceland’s emphasis on certification may have increased biomass and reduce excessive and harmful fishing pressures.

Researchers in 2011 found a price premium for eco-labeled products, reaching 14.2% in some markets (Roheim, 2011). There is a growing consensus on the importance of certification. Large companies like Ikea and Edeka will only buy sustainably certified fish. As early as 2007, the entire country of Netherlands announced a goal for 100% of its seafood products to be MSC certified (MSC, 2007). As shown internationally, the MSC certification builds trust and carries significant economic weight.

While MSC certification may be an administrative and financial burden for small scale and developing world, it has brought significant environmental and economic benefits worldwide (Bush, 2013). According to the United Nations, over three billion people depend on marine and coastal biodiversity for their livelihood worldwide (UN, 2015). In the last decade the global per-capita supply of fish as human food has reached an all time high (FAO, 2010). Moving forward Iceland hopes to become an even larger contributor to the sustainably certified global catch. Through the coordinated efforts of Icelandic fisheries and the MSC, the global seafood economy can hopefully maintain sustainable and profitable fisheries for generations to come.

Click here for a PDF version of this analysis.